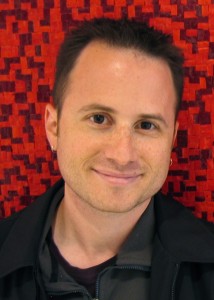 Peter Traub (b. 1974, Johannesburg, South Africa) is a composer/installationist/net artist currently living in Charlottesville, VA. He completed his Ph.D. in 2010 in the Composition and Computer Technologies program at the University of Virginia. He received his Master’s in Electro-Acoustic Music from Dartmouth College in 1999, and has composed numerous works of electronic music and several internet-based and physical sound installations.

Between Dartmouth and UVA, Peter lived in the San Francisco Bay Area for five years, moonlighting as a visiting researcher/composer at the Center for Computer Research in Music and Acoustics (CCRMA) at Stanford University while he worked as a software developer at internet startups. His dissertation, titled “Spatial Exploration: Physical, Abstracted, and Hybrid Spaces as Compositional Parameters in Sound Art”, was a series of performances, installations, and a large paper exploring the use of technology-mediated spaces in contemporary music. In his spare time Peter also contributes interviews to the Networked_Music_Review. He currently lives in Charlottesville with his wife and three-year-old son.